How to Return to BJJ or Judo After Injury: A Step-By-Step Approach

In this article I’ll share with you the step-by-step treatment planning process I use to help return to BJJ or Judo after injury.

This is the logical progression for an injured grappling athlete to:

Prevent an injury from occurring the first time back on the mats.

But before we get started with the first step:

Understand the cause and effect of your injury

If you’re injured, the best thing you can do is work with a physio who understands the sport-specific demands of BJJ or Judo so they can advise you of your starting point.

The 3 main reasons for this is that they can help you identify:

On that last point:

Sometimes accidents just happen… but in most cases injuries are preventable.

For example, I hurt the meniscus in my knee while doing a triangle choke.

The reason I hurt myself wasn’t just about the person stacking me, but also:

Read: Grappling With a Meniscus Tear: Returning to BJJ After Knee Injury

So bear in mind that depending on the injury and the person’s goals:

1. Develop the prerequisite strength and mobility needed to get back on the mats ASAP

If you’re recovering from an injury then you might need to take some time off the mats to:

But how long you NEED to stay off the mats depends on a lot of things.

One of the most frequently asked questions I hear is:

When can I return to the Judo or BJJ mats after an injury?

The answer is always the same: You should get back on the Judo or BJJ mats as soon as possible after an injury as part of your rehab and return to sport program. But… first you need to define what “getting back on the mats” actually means: There’s different types of drilling and rolling that vary in predictability and intensity, so any good rehab program works logically through these as part of a step-by-step graded exposure and loading program.

[it’s the equivalent of trying to come straight back into a basketball pick-up game without first testing your ability to run, jump, dribble, shoot, or do a layup]

So the goals here are to:

2. Carefully selected solo drills that work around the injured part

The solo drills you start with need to be carefully selected to be within your injured joint’s capacity. This can:

An example is variations of bridging exercises. These might be:

(but in a non-threatening way)

3. Solo drills that replicate the demands of grappling

(in terms of both levels of load and speed of movement)

But the key thing is:

You remain in control of things like speed and change of direction.

By doing this you will:

4. Drill techniques with an unresisting partner

Just because you’re not ready to roll, it doesn’t mean you can’t drill selected techniques.

This part of your rehab could be done:

The single most important thing here is to work with a training partner you can trust:

They need to be both competent and patient enough to work around your limitations.

5. Drill techniques, combinations, and counters with a semi-resisting partner

It’s a big jump between drilling techniques and rolling…

…so your most important rehabilitation tool is to have an awesome training partner or coach:

Someone who’s aware of the effect of their actions… and knows how to control the pace and intensity to gradually move between 25%, 50%, and 75% resistance.

Drilling techniques, combinations, and counters with a semi-resisting partner will:

At some point you need to pressure test your ability:

Positional sparring is a great way of to control predictability while testing intensity. 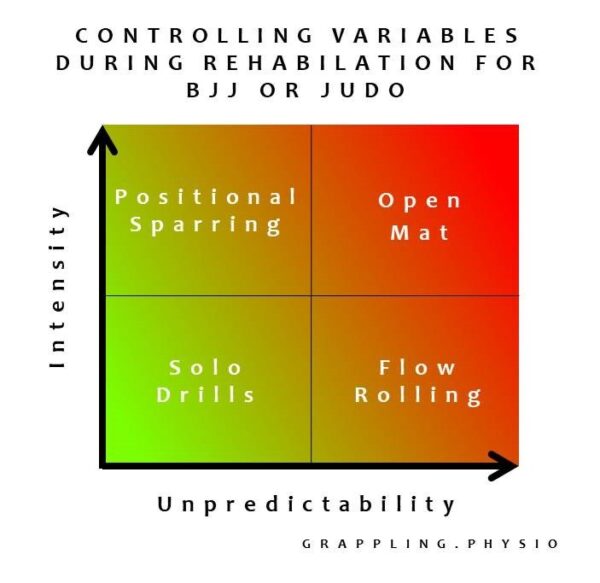 And here’s where art meets science. You can use positional sparring to:

Either way, you’ll be able to complete some part-practice under rolling-like conditions

From the perspective of testing out an injury, flow rolling is almost the opposite of positional sparring:

[obviously you need a good training partner to do this though]

If you’ve gone through each of the previous steps then returning to rolling or randori with your selected training partners should be no big deal at all:

[your last session would have been similar just with less load, speed, or duration]

So what path would you rather have taken to get here?

The interesting thing about those 2 options is that with one of them you’ll know when you’re ready to roll… with the other, it’s just a guess

Summary: The step-by-step process to return to BJJ or Judo after injury

If you’re injured, the best thing you can do is work with a physio who understands the sport-specific demands of grappling:

…and the majority of this time should be on the mats as part of your rehab.

This way you’ll progress your return at the right rate, and it’ll mean that you:

The time spent in each of these phases will be completely different depending on the injury. For an example:

Read: Grappling with Golfer’s Elbow: Rehab for BJJ and Judo

Grappling with Golfer’s Elbow: Rehab for BJJ and Judo